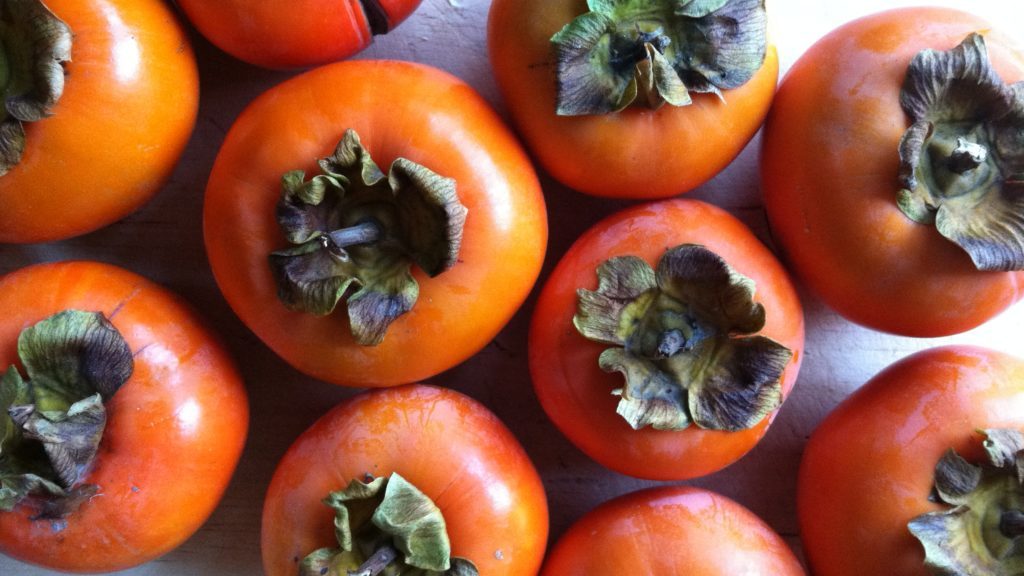 Persimmons should come with a warning label. They are an inviting fruit, acorn-shaped, vaguely resembling a tomato with a cheerful orange color. They look like they should taste wonderful. Don’t be fooled by this beguiling façade. A less-than-ripe persimmon is horribly astringent due to tannins in the fruit that dissipate as it ripens.

This is a fruit which should only be eaten when fully ripe, i.e. completely soft to the touch, like a seriously overripe tomato. Actually, this is only true of Hachiya persimmons, the most common variety sold in stores. Another variety called Fuyu can be eaten when still firm without ill effect.
Both Hachiyas and Fuyus are cultivars imported from the Orient. Commodore Perry brought them to America from Japan in 1856, and between the two they account for almost all of the persimmons bought and sold in the U.S.

While our cultivated persimmons are all of Asian origin, wild persimmons are native to many parts of the United States. Like the Hachiya persimmon, they are best eaten when fully ripe. They were dried and eaten by Native Americans from Connecticut to Texas. In fact, the word “persimmon” comes from an Algonquian language of the eastern U.S., meaning “a dry fruit.” Persimmons are a late fall fruit, their season stretching from late October well into December.

Because the ripe fruit is so fragile, the persimmons you see in the store often need to be ripened at home. A Hachiya persimmon that is just beginning to soften can take a week or more to ripen. The fruit tastes best when it has softened to a completely jelly-like consistency.

At this stage, it is honey-sweet with a wonderful, subtle flavor. The best way to eat it fresh is with a spoon. Ripe persimmons can be frozen and used later in ice cream, smoothies, or mixed with yogurt. Persimmons are also often used in recipes for cookies, cakes or puddings.

Persimmon pudding is a traditional American dessert often served around the holidays. The following recipe is for a persimmon pudding cake. It is easier to make than the traditional pudding, but results in a cake so moist it has an almost pudding-like consistency. Serve it with a dollop of whipped cream for a festive and delicious dessert.