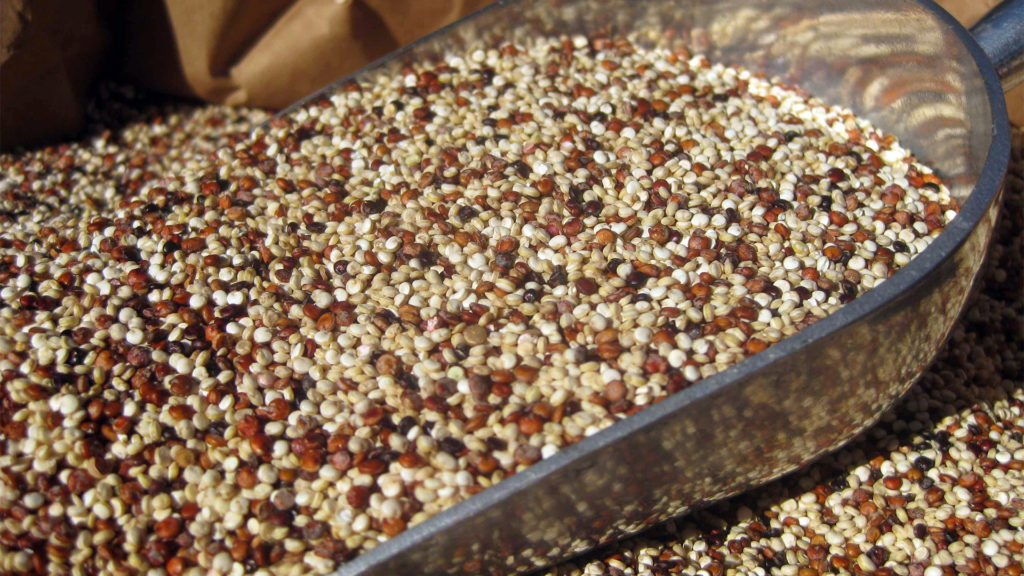 The relationship between ancient civilizations and their staple foods is fascinating. The people of antiquity weren’t stupid. Through a long process of trial and error, they discovered and perfected food crops that were both nutritious and peculiarly well suited to the places in which they lived. Consider the Incas. They developed the largest and most sophisticated ancient civilization in the Americas. Their millions of inhabitants occupied an area in the Andean region of South America which stretched for thousands of miles from North to South. Most of this area is at an elevation over 10,000 feet, not exactly hospitable for agriculture. Yet the Incas thrived on a diet based on potatoes, corn, and perhaps most importantly, quinoa (pronounced keen-whah). The Incas considered quinoa the “mother of all grains.” The sacredness to the Incas of quinoa is attested to by the fact that the first seeds of the season were sown with a golden shovel by the Inca emperor himself.

Quinoa was widely used in religious ceremonies, which prompted the Spanish conquistadors to actively suppress its cultivation. Quinoa was so successfully repressed by the Inca’s European conquerors that it was all but forgotten, grown only by poor peasants in isolated areas. Then, about 30 years ago, it was “discovered” by researchers searching for new food crops suited to demanding conditions. Quinoa is now on the comeback trail, and is being actively cultivated in Canada and the U.S. It has become especially popular for natural foods enthusiasts, who seek it out in seed form, as a flour, and as a wheat-free pasta.

Nutritionally, quinoa has a number of things going for it. Perhaps most important is its extremely high protein content (12-18%), which is higher than any other grain. Not only is it high in protein, but the protein in quinoa contains an almost perfect balance of the eight amino acids considered most critical for humans. In addition to its high protein content, quinoa also contains significant amounts of magnesium, iron, calcium, and B-vitamins. It is easy to digest, which makes it a good choice for people with allergies or other digestive issues.

Quinoa seed in its natural state contains a coating of bitter-tasting saponins, which must be removed before you can eat it. Commercially processed quinoa removes this coating for the most part, but thorough washing in a strainer is still recommended before cooking. Quinoa seeds are small, about the size of millet, and they cook quickly, in about 15 minutes. Quinoa has a delicate, slightly nutty flavor and fluffy texture. It is delicious eaten as a breakfast cereal with a little honey or a few raisins added. It can be substituted for other grains in pilaf-type dishes or grain salads like tabouli. It can also be added to soups or stews during cooking just as you would add rice or barley.

Here is a recipe for a pilaf-like dish featuring quinoa and leeks:

QUINOA WITH LEEK AND CURRANTS

Wash all of the larger leaves very well (leeks are very dirty. If you don’t wash it well enough your final dish will be gritty). Chop washed leeks cross-wise into thin slices. Place quinoa in a fine-meshed colander and rinse well for several minutes. Place leeks in nonstick pan and cook until limp and reduced (no need to add liquid, leeks will have some water from being washed and tend to give up liquid as they cook). Add spices to the leeks and stir until well mixed. Add quinoa and cook for a couple minutes. Add stock and tomatoes, bring to a boil, lower heat and simmer, covered, for 15-20 minutes until done. Serves 8