Tempeh: A Soy Product for Everyone 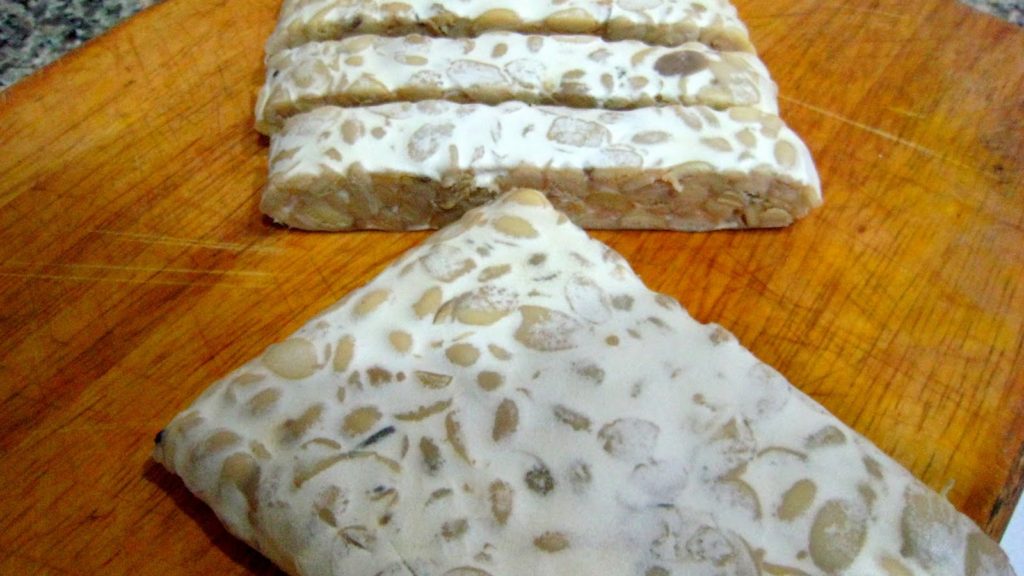 Do you ever have to cook for a group that includes both vegetarians and meat eaters? I’ve encountered this situation many times and it used to leave me flummoxed. Obviously meat is out, but I want to provide something substantial for the meat eaters for whom tofu just doesn’t cut it. On these occasions, tempeh has often provided the perfect solution.

Tempeh is a fermented soybean cake that originated in Indonesia and is popular throughout Southeast Asia. It is made by soaking and dehulling whole soybeans, partially cooking them, and then fermenting them in an environment which encourages the growth of a particular mold around them. The result is a block of soybeans knit together by a mat of white mycelia. I know this doesn’t sound particularly appetizing, but take my word for it, the result is a versatile food which is amenable to all sorts of marinades and has a nice substantial meaty texture, unlike its flaccid cousin tofu. Because it is made from whole beans, and due to its unique fermentation process, tempeh is also nutritionally superior to tofu. Tempeh has a higher content of protein, dietary fiber, and vitamins than tofu. The protein in tempeh is also more digestible. In particular, the oligosaccharides that cause gas are reduced by the Rhizopus culture used to make tempeh.

There are lots of ways you can use tempeh. Often I will cut it into pieces, marinate it in soy sauce and some grated ginger, and then fry it in a pan either by itself or as part of a stir fry. It can be grated with a cheese grater and added to chili or spaghetti sauce instead of using ground beef. One traditional Indonesian way to prepare tempeh is to thinly slice it and deep fry it in oil. This gives it a crispy golden crust with an inside that is soft and chewy. Tempeh is now widely available and can be bought either refrigerated or frozen. It comes sealed in plastic and you may notice a mild ammonia odor when you open it. This is a normal. However, if your tempeh has an overpowering odor, it means it has gone bad. Occasionally you will see black patches on the surface of your tempeh. This is normal too, and shouldn’t affect the flavor.

Here is a recipe for a tempeh dish made with pineapple. Serve with rice and a vegetable or salad for a meal that should please vegetarians and carnivores alike.

Combine marinade ingredients in an 8 oz. baking dish. Cut tempeh into 6 portions and spread out in marinade dish, turning to coat evenly. Cover dish and marinate 2-6 hours, turning pieces frequently. Heat olive oil in a skillet. Lift tempeh from marinade with a slotted spatula and brown for 1-2 minutes on each side over medium high heat. Remove to serving dish and set aside. Pour remaining marinade into the skillet and add the pineapple with its juice. Bring to a boil. Combine cornstarch or arrowroot and water in a small cup and pour into the boiling pineapple mixture at little at a time, stirring constantly until thickened. Pour over browned tempeh. Garnish with chopped parsley and serve.