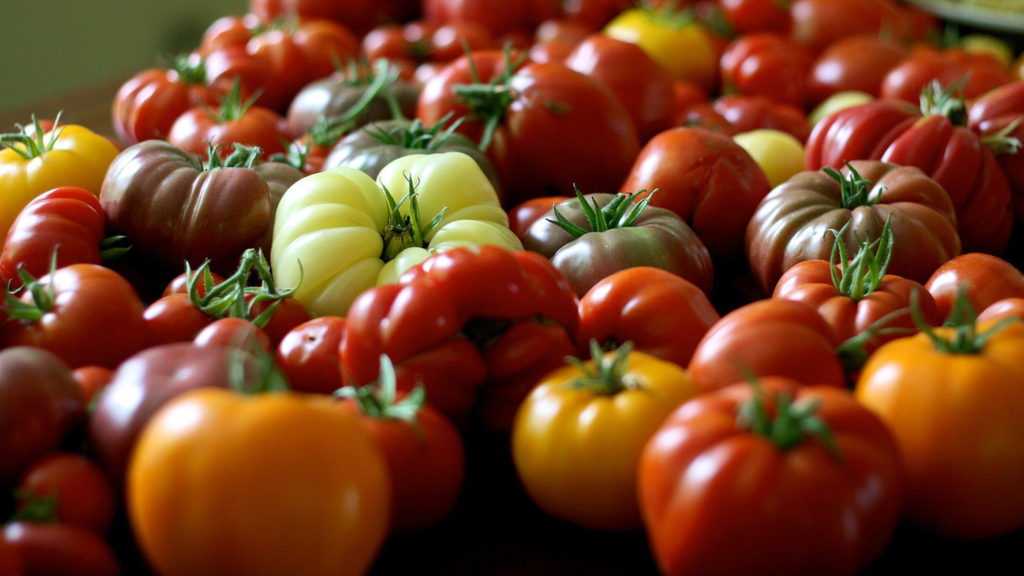 One of the drawbacks of living in Alaska is that you can’t grow tomatoes. Where I grew up in Virginia nearly everyone had at least a couple tomato plants growing in their yard. The sight, taste, and smell of ripening tomatoes was as sure a sign as any that summer had come into its fullness.

While tomatoes fresh off the vine are not part of the Alaskan summer experience, there has been a definite improvement in store bought tomatoes here in the last few years. I noticed this the other day when I opened a box of on-the-vine tomatoes and the smell transported me to the muggy summer afternoons of my childhood.
They actually smelled like real tomatoes!

While tomatoes are available in stores year round, for most of the year I don’t even give them a second glance. However, from about the middle of July to the middle of September you can often find tomatoes with excellent flavor at the market. The first really good tomatoes of the season are the cherry types that show up in July. One variety to look out for are “sweet 100’s,” a small and intensely sweet little tomato so named because it comes about 100 to a pint.

Another variety, which might be the sweetest tomato I have ever eaten, is the Sungold. Cherry tomatoes can be thrown into salads, as a garnish on pizza, or simply to snack on just as they are. Kids especially enjoy them because of their small size and sweetness.

There are lots of varieties of red, main crop tomatoes and these come into their own in late July and August. When buying, look for ripe unblemished fruit that is heavy for its size. If you are getting tomatoes for a salad or for slicing, look for the thinner-skinned varieties that are sometimes dubbed “salad” tomatoes. Thick-skinned varieties like Roma tomatoes, while fine for cooking, are not particularly flavorful eaten raw.

One exciting development in recent years is the appearance in the commercial market of so-called “heirloom” tomatoes. These are old time varieties that pre-date the modern hybrids that were developed for their shipping qualities rather than flavor. Heirloom tomatoes come in an astonishing array of colors, shapes and sizes with colorful names like Green Zebra, Lemon Yellow, Cherokee Purple and Big Rainbow.

Store bought tomatoes here in Alaska should be close to ripe by the time you buy them. If they need to ripen a little more, just keep them at room temperature for a couple days. It is not true that tomatoes ripen better in a sunny window, where they are likely to get too hot. Don’t refrigerate your tomatoes either. It ruins the flavor. And never store tomatoes in a plastic bag.

Here is a recipe for a simple tomato salad. This would be something best made only during the summer when good ripe tomatoes are available:

Choose the best tomatoes you can find that are fully ripe but not too soft. Slice large tomatoes in wedges or slices, cherry tomatoes in half. Moisten with balsamic vinegar (how much will depend on the sweetness and acidity of the tomatoes), season with salt and pepper, and drizzle generously with good quality olive oil. Mix gently to keep the tomatoes intact and garnish with torn basil leaves, garlic croutons and slices of fresh mozzarella.