Add Life to Soups, Sauces and Dips with Miso 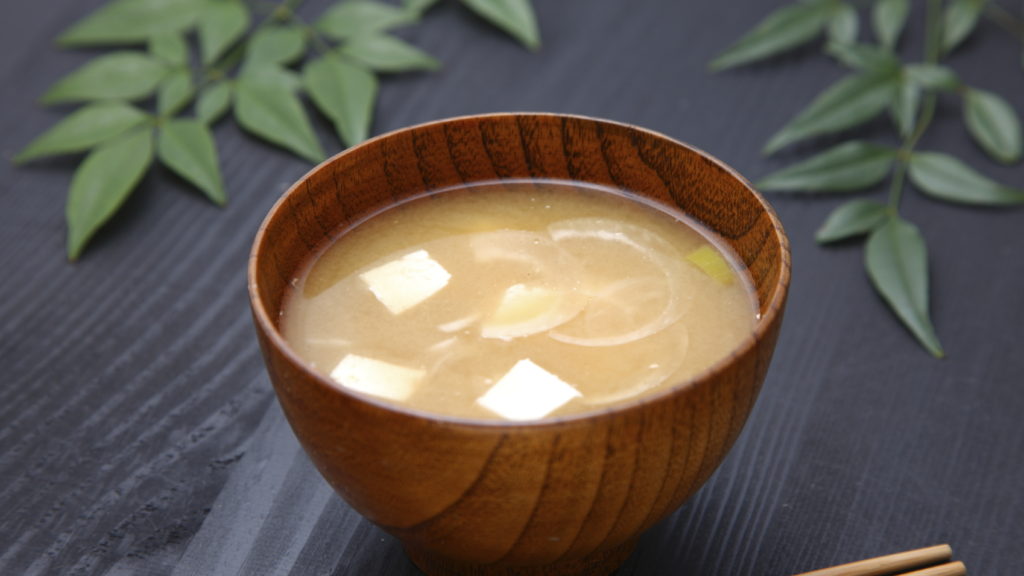 Back in the 1970’s when I first got interested in natural foods, macrobiotics was all the rage. This philosophy of diet and health emphasized the concepts of balance and the practice of a traditional, grain-centered diet. Since the originator of macrobiotics, George Oshawa, was Japanese, traditional Japanese foods figured prominently in the macrobiotic diet. Besides brown rice which everybody associates macrobiotics with, one of the most important macrobiotic staples was miso.

Miso is a fermented soybean paste widely used in Japanese cooking. It is thought to have originated in China over 2,000 years ago. Miso is made by combining cooked soybeans, mold, salt and various grains, and then fermenting them for from 6 months to 2 years or more. The result is a paste with a texture similar to peanut butter but not as oily. It ranges in color from tan to deep amber to chocolate brown.

Miso is a concentrated protein source with an amino acid profile similar to that of meat. Its high protein content makes it particularly useful for vegetarians. It is also a living food containing friendly bacteria (lactobacillus) that aid in digestion and assimilation.

There are three basic types of miso: soybean (hatcho), barley (mugi), and rice (komi). Hatcho miso is the strongest flavored of these three, and the most salty. Komi miso is sweeter and more delicate, while mugi miso is somewhere in between.

The most typical use for miso is in soup, where it adds richness and flavor to any broth. It is best to add miso to soup at the end of cooking. Thin it with some soup stock and then add the thinned puree to the soup, allowing it to simmer very lightly for only one minute. Longer cooking destroys miso’s beneficial organisms.

When buying, always favor unpasteurized, naturally fermented miso which you will find in the refrigerated section of the store. While strictly speaking, miso doesn’t have to be refrigerated, unrefrigerated miso may develop a layer of mold. I know this from experience because “back in the day” I had a 15 pound tub of miso that wouldn’t fit in my refrigerator. Every so often, a layer of mold would develop on top of it, which I would simply scrape off. It didn’t seem to affect the flavor, but it could be rather off-putting for the faint of heart.

Miso is considered an alkalinizing food that promotes resistance to disease. According to tradition, miso promotes long life and good health, and protects the body against environmental toxins and even radiation.

One this later score, there is a remarkable account from Shinichiro Akizuki director of Nagasaki’s St. Francis Hospital which was located a mile from the epicenter of the atomic bomb blast in 1945. According to Dr. Akizuki, the staff at the hospital treated hundreds of people for radiation sickness after the atomic bomb was dropped, yet not one staff member developed radiation sickness in spite of the fact that they were exposed to enormous doses of radioactivity. Dr. Akizuki theorized that it was the daily consumption of miso soup by himself and his staff that protected them from the ill effects of radiation.

In addition to adding it to soup, miso can be used in dips and sauces. Some people even add a teaspoon of miso to their guacamole! Here is a simple recipe for a miso dip that is high in protein and calcium from the combination of miso with sesame butter.

Puree ingredients with a mortar and pestle. Serve as a dip for vegetables. To make a sauce, add ¼ cup more water.