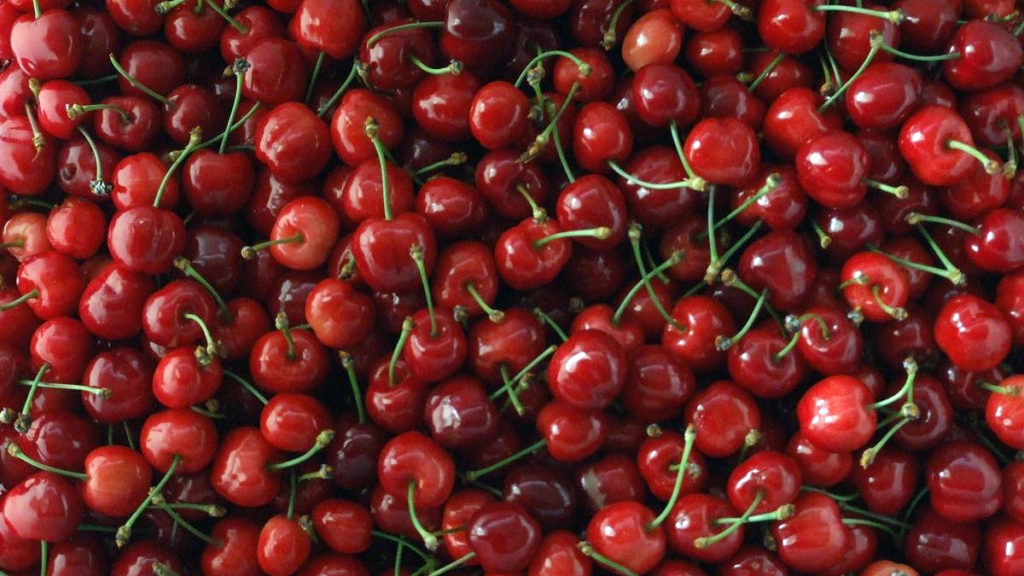 I was familiar with the flavor of cherries long before I ever ate one. Whenever I had a cold as a young child, I asked for the cherry flavored cough drops, which I vastly preferred to the licorice flavored ones.

Many years later when I finally got to try fresh cherries, I was pleased to find that they tasted even better than the cough drops. There are few greater pleasures in life than biting into a crisp, sweet cherry.

It is a pleasure which is available only fleetingly each year. Cherries are a delicate and highly perishable fruit and do not take kindly to intercontinental shipping. Thus, sweet cherries are one of few remaining fruits which are truly seasonal, being available only from mid June to the end of July.

The first sweet cherries originated in the area between the Black and Caspian seas of Asia Minor. They were probably first cultivated by the ancient Greeks and were highly valued by the Romans whose legions spread them throughout Europe. Both sweet and sour cherries came to America with the English colonists, and must have been well enough established by the mid 18th century for a young George Washington to chop down his father’s tree.

Cherries are an abundant source of Vitamin A and iron. Chinese medicine considers them a warming food that increases vital energy. Traditionally cherries have been used to treat gout and rheumatism. The bark of the cherry tree made into a tea is an old time remedy for coughs.

Sweet cherries are a temperamental fruit, and a late frost or too much rain can devastate them. Sour cherries, on the other hand, are much more tolerant of both frost and wet climates. In fact, sour cherry trees can be found in many yards around Juneau, and in the past few years with our warmer summers have born abundant fruit.

Because sweet cherries are so particular about weather and soil conditions, there are few places in the world where they can be commercially successful. Fortunately for us, one of these regions is the northwest U.S. Our southern neighbors Washington and Oregon are the biggest producers of sweet cherries in the country.

There are several varieties of cherries grown, but here in our local stores you will usually see the two predominant varieties from the Northwest: Bing and Rainier. Bing cherries are firm in texture and have a deep black-red color and a rich, sweet, classic cherry flavor. Rainiers are a beautiful yellow and red cherry. Crisp, sweet, and delicate, they are considered by many to be the best cherry for eating. Rainier cherries were originally developed by the US Department of Agriculture, firmly refuting the notion that the Federal government has never accomplished anything worthwhile.

When buying cherries, look for a glossy outer surface free from discoloration or indentation and a fresh, pliable stem. Store them refrigerated in a plastic bag and eat them as soon as you can. There is a definite advantage to buying organic, because cherries are one of the most heavily sprayed fruits. According to the Environmental Working Group, pesticide residues were found in 91% of the commercially grown cherries tested.

Sweet cherries are delicious eaten fresh out of hand, or in fruit salad. Indeed, they are so good fresh that cooking them seems almost sacrilegious. In the case of Rainier cherries, cooking is actually contraindicated because they lack sufficient acidity to be interesting cooked, according to food maven Alice Waters.

Here is a simple recipe for a cherry fruit salad. Feel free to use other fruits besides those suggested. If you don”t have a cherry pitter, you can pry out the cherry pits with a small paring knife.