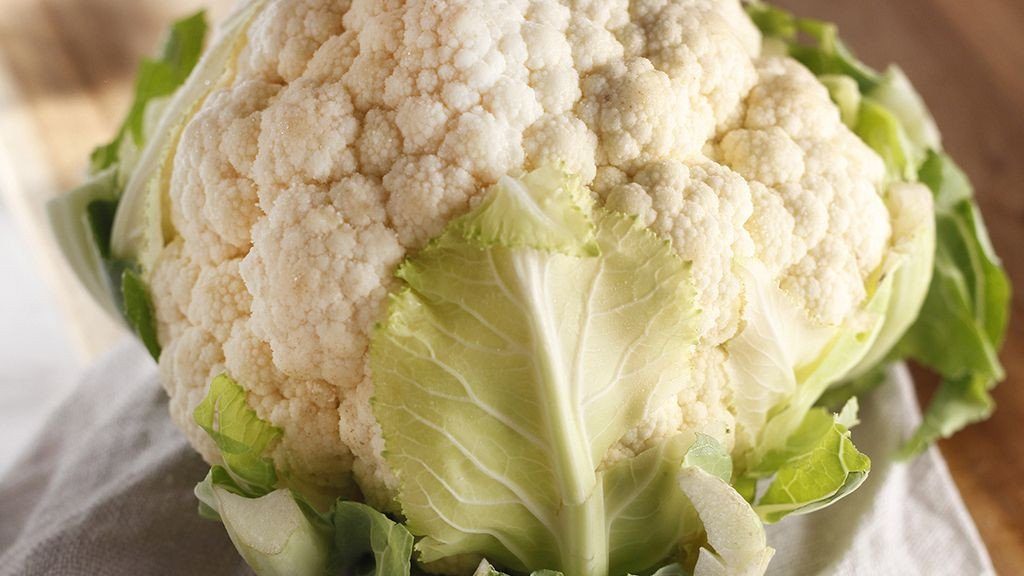 In natural food circles, there is a general aversion to foods that are white. White sugar, white flour, and milk are all on various “foods to avoid” lists. I read recently about a man who lost 41 pounds in two months on the latest diet, known as “the White Foods diet.” This diet is simple. It consists of avoiding all foods that are white. Of course, any diet based on color alone will necessarily exclude foods that are good for you. One casualty of prohibition of all white foods would be cauliflower, a vegetable with impeccable credentials.

Cauliflower is a low calorie source of Vitamin C, folate, fiber, and complex carbohydrates. Like other cruciferous vegetables, it is believed to contain compounds that reduce the risk of cancer. “A cauliflower,” said Mark Twain, “is nothing more than a cabbage with a college education.” Perhaps Twain’s comment was inspired by the cauliflower’s vague resemblance to a brain. Cauliflower was actually considered a “brain food” in olden times according to the “Doctrine of Signatures,” a medieval belief that plants bearing a resemblance to parts of the body have useful application in treating those parts.

While cauliflower is available in stores year-round, it is at its best during the autumn months. It has been described by one fan as the most “aristocratic” of the cruciferous vegetables, with its creamy white head nestled in the center of long green leaves. Good cauliflower has a sweet, mild taste. It is a versatile vegetable that can be eaten raw, lightly steamed, roasted, or boiled and pureed. Like most vegetables, and particularly cruciferous vegetables, overcooking will ruin it. It is best if it is still a little crunchy. If cooked too long, cauliflower becomes mushy and grey and develops a sulfurous odor.

When choosing cauliflower, look for dense, unspotted heads with creamy white, compact florets. If you can find it, look for cauliflower that still has the leaves attached. I am partial to organically grown cauliflower, which I find less bitter than commercially grown. For best flavor, cauliflower should be eaten as soon as possible after purchase. I am not a fan of pre-cut cauliflower florets, or any pre-cut vegetable for that matter. Pre-cut vegetables have more surface area exposed to air which means loss of both flavor and nutrition.

The following recipe is for an eye-catching Cauliflower salad that can be served as an appetizer or perhaps as part of a simple lunch. And for those on the White Foods diet, you could always substitute purple cauliflower.

Source: The Art of Indian Vegetarian Cooking by Yamuna Devi