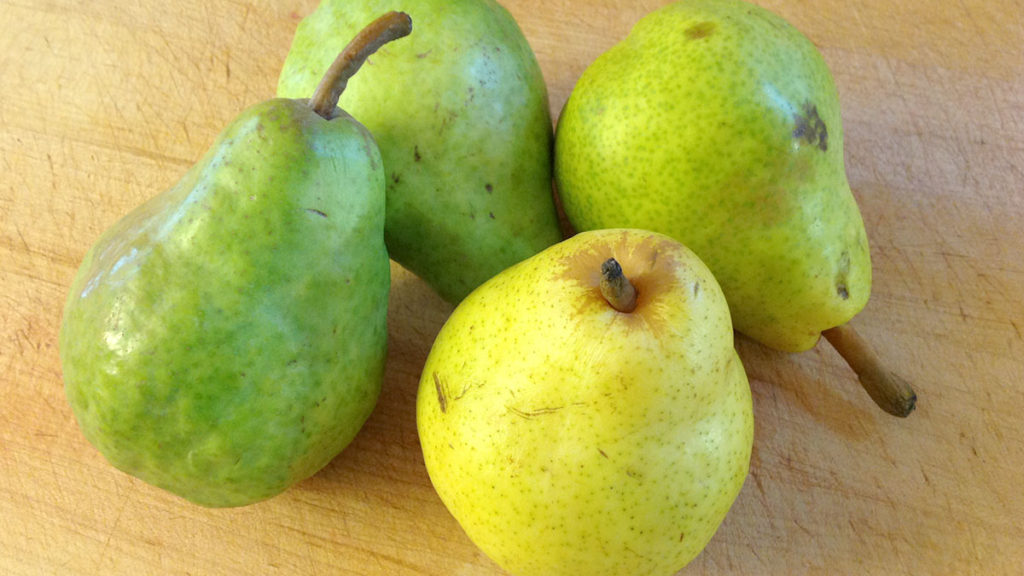 A few weeks ago I wrote about apples and the excitement attending the arrival of the new crop. With all the hoopla about apples, it is easy to overlook other fall fruits. One victim of this neglect is the pear. Few fruits are as underappreciated, being forced to share the spotlight with such a glamorous cousin.

This lack of appreciation is a shame. In my opinion, a ripe, ready-to-eat pear is a worthy rival of any apple. Apples may be crisper and sharper flavored, but there are few pleasures greater than a really good pear. Soft and succulent, a ripe pear will melt in your mouth with a smooth juicy sweetness and subtle aromatic flavor that makes apples seem brash in comparison.

While there are numerous varieties, pears can be broken down into two classes: European and Asian. European pears have the classic pear shape and texture. They are a sensitive fruit, which bruises easily. Fortunately, they are at their best when picked early and allowed to ripen off the tree.

When shopping, choose fruit that is a bit firm. Smell it. A good pear will have a distinct pear aroma. Ripen at room temperature in a loosely closed paper bag. When the stem end yields to gentle pressure, the pear is ready to eat. Among European pears, Bartletts are the first to make it to market, arriving in August or September. They are bell shaped and come in both yellow and red varieties. Smooth and buttery, the Bartlett is a versatile pear, good both fresh and cooked.

Boscs are considered the best pear for cooking. They feature an elegant slender neck and russet colored skin. They can be intensely sweet and are terrific baked in pies or poached. Comice are a round winter pear with a short neck. They are very juicy when ripe and soft enough to scoop out with a spoon. D’anjou are the most common pear, perhaps due to their excellent keeping properties. They tend toward roundness with very little neck and can be eaten fresh or cooked.

Unlike European pears, Asian pears are picked ripe. They are best eaten fresh and have a sweet flavor and crispy texture which makes them an excellent addition to fruit salads. Because they don’t have the acid balance of their European cousins, Asian pears tend to lack their nuanced flavor, tending more toward simple sweetness. They are delicious nonetheless.

Pears are a good source of fiber, particularly pectin, which reduces serum cholesterol and cleanses the body of toxins. In Chinese medicine, they are said to clear heat and energize the stomach and the lungs. Loquats, a Chinese pear, are found in a popular cough syrup.

Pears go especially well with blue-veined cheeses. The following is a recipe for a simple salad with carmelised pear and blue cheese. This recipe is best with a good robust blue cheese. Gorgonzola works well, or for a special treat, make it with one of the excellent American blue cheeses such as Maytag or Rogue River Blue.

Place butter, vinegar and sugar in a frying pan over medium heat. When butter is melted, add the pear and walnuts and cook for 4-6 minutes, until pear is just soft. Place the arugula on serving plates and top with the pear and walnuts. Spoon the pan juices over the salad and crumble blue cheese over the top. Serves 4.