Which Butter is Better? 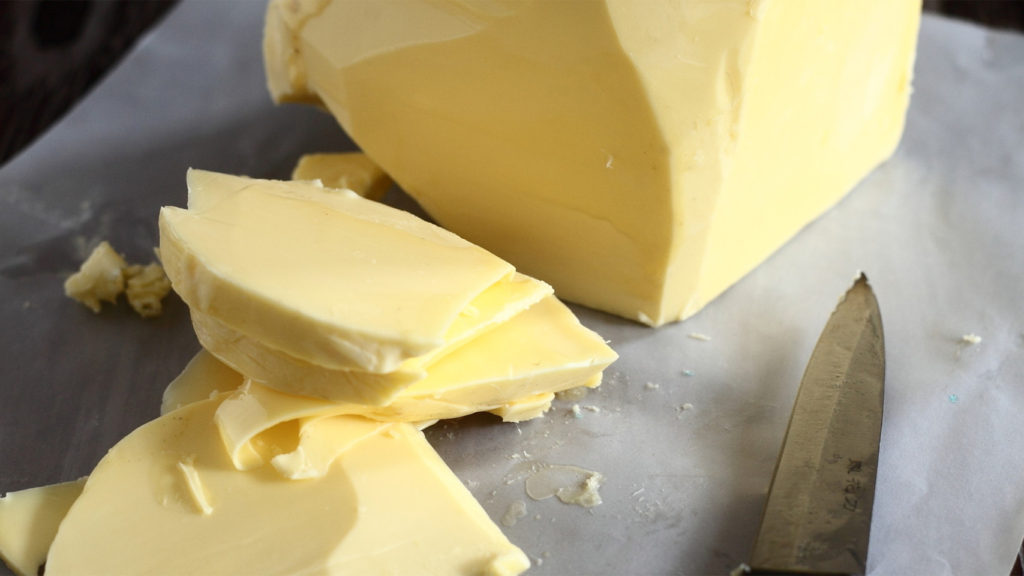 If you lived in Juneau in the 1980’s, you’ll remember Le Petit Paris bakery. Its proprietor, Tom Loatman, made perhaps the best croissants on the West Coast. He insisted on using only French butter in his baking. Occasionally he would run short on imported butter, and come to our shop to get organic butter. I knew he was bestowing his highest accolade when he said of our butter: “It is closest to French.”

What is so different and special about French butter? Several things. First, it has a higher butterfat content: up to 85% versus 80% for commercial American butters. This results in lighter, flakier baked goods and a creamier mouth feel. Second, it is made from cultured cream, and is then “ripened”. This process takes longer than using sweet cream, but it imbues the butter with a deeper, richer flavor.

A final difference, often overlooked, is that French butter originates from cows raised on small farms rather than large industrial farms. These cows spend a lot more time in the pasture, which contributes to both the taste and the nutritional quality of their milk. The French call this value the “taste of the soil.”

Fortunately, if you want really good quality butter from pastured animals, you do not have to import it from France. These days, there are several American made “European-style” butters available. They are made from the milk of organically raised cows with ample access to pasture. Two brands available locally are Organic Valley and Strauss Family Creamery. These companies also make salted, “sweet cream” butters that are not cultured.

I generally use only organic butter, and not just because it tastes better. While any butter is superior to margarine in terms of health benefits, organic butter has a clear edge over commercial butter. Organic butter has higher levels of Vitamin A and essential fatty acids. It is also less likely to be contaminated with toxic pesticide residues.

Pesticide contamination is not a trivial concern. According to the Pesticide Action Network of North America, non-organic butter was ranked first as the food most contaminated with persistent organic pollutants (POPs).

Kristin Schafer, program coodinator at the Pesticide Action Network notes: “POPs are toxic chemicals that stay in the environment and our bodies for months, years, sometimes even decades.” The reason butter is so high in POPs is that they are “lipophilic” meaning they are attracted to fatty tissues and substances like milk that contain fats. Fortunately, organic butter is largely free of POPs because organic practices exclude the use of hormones or pesticides in production.

If you’ve never used “European style” butter before, you are in for a treat. It really does make a difference when baking cookies, pastries and pies. I always use it when I make pie crusts, and have been delighted with the results. Here is a basic pie crust recipe:

Mix flour and salt in a bowl. Cut in the butter until it is reduced to bean sized pieces. Stir in water with a fork one tablespoon at a time, until the mixture is just moist enough to hold together. The amount of water will vary depending on the kind of flour you use and the humidity. Form the dough into a ball, wrap it in wax paper or plastic wrap and flatten it into a disk. Refrigerate for at least one hour. Roll out the dough on a lightly floured surface. Place in a pie tin, crimping edges if you wish. Add filling and bake. This recipe yields a 9 inch crust, and can be doubled for a 2 crust pie, or increased proportionately if you want enough extra dough for a lattice on top of the pie.