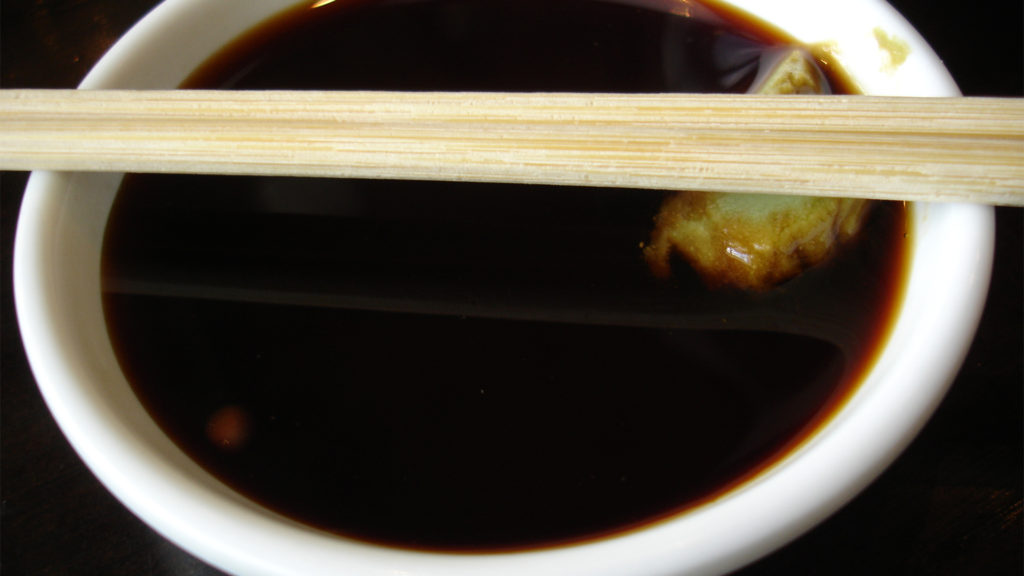 My last two columns talked about miso and seaweed respectively. Both are staples of Japanese cooking. This week I will complete the trifecta by discussing soy sauce, known in Japan as shoyu. Perhaps no item is as ubiquitous at Japanese tables, where high quality shoyu is treated with the same sort of reverence that some in the West reserve for fine wine.

Like fine wine, good shoyu is a product of natural fermentation. To make it, equal parts of soybeans and wheat are blended and an aspergillus mold is introduced. This blend matures for several days whereupon it is mixed with salt-water to produce a mash called moromi.

The next and most important step is to allow the moromi to ferment. This takes from several months to two or more years. During this time, the moromi turns into a semi-liquid, deeply reddish-brown mash. At maturity, this mash is pressed through layers of filtration cloth. The dark liquid that emerges is natural shoyu.

Naturally brewed shoyu has a rich, complex flavor and aroma that is a direct result of the process of fermentation. It is not to be confused with commercially made soy sauce. The commercial stuff is made by boiling soybeans with hydrochloric acid for 15 to 20 hours. This hydrolyzed soy protein mixture has the solids filtered out. Caramel color is added for color, corn syrup for sweetness, and salt for saltiness. The resulting liquid is then refined and packaged. The whole process takes a couple days, compared to a year or more for naturally fermented soy sauce.

Technically speaking, both varieties are “soy sauce.” However, your taste buds will readily discern the difference. Unlike natural shoyu, commercial soy sauce tastes harsh, salty and one-dimensional. In contrast, the best quality naturally fermented shoyu not only contributes its own rich flavor to foods, but also harmonizes the flavors of the different ingredients present in any given dish.

When buying, look for varieties of soy sauce that say “Naturally Brewed” on the label. They will cost more than commercial varieties, sometimes much more, as in the case of imported Japanese shoyu aged in cedar kegs such as the Oshawa brand. The cost is justified because a little bit goes a long way, and because natural shoyu is such an effective flavor enhancer that it will make almost anything (except desserts) taste better.

A close relative of shoyu is tamari, which is made similarly except without the wheat. Tamari generally has a stronger flavor than shoyu. It holds up better to long simmering such as in soups or stews. Shoyu, on the other hand, should only be added to foods during the last few minutes of cooking or when they are ready to serve.

Here is a recipe for home-made teriyaki sauce. This version avoids the hydrolyzed vegetable protein or MSG that often lurks in store bought varieties. Use it to marinate chicken or fish.

Mix all ingredients together with a whisk.