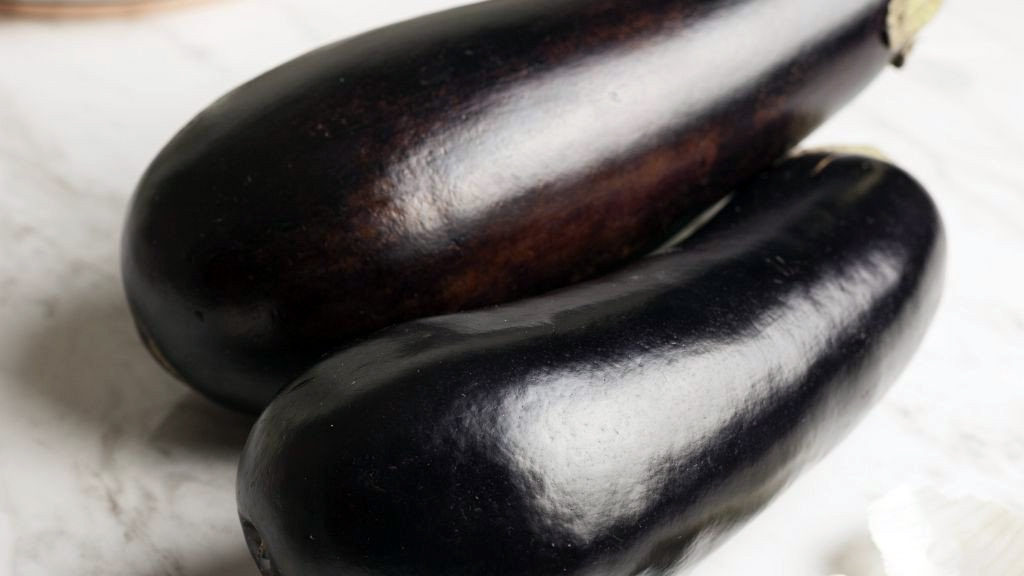 If there were ever a beauty contest for vegetables, eggplant would be a serious contestant. Indeed, there are enough lovely varieties of eggplant to have a competition consisting of eggplant alone. In addition to the common deep purple Globe eggplant with its smooth shiny skin, you would have to give strong consideration to the long slender Japanese eggplant, the lavender eggplant called Purple Rain, and the purple and white striated version known as Neon eggplant.

With all these colorful eggplant varieties, you may wonder how this vegetable got its name. Apparently the kinds of eggplant that were most common when it was introduced to this country were the smaller white varieties, including one called “White Egg” which bears a striking resemblance to a goose egg.

First cultivated in southern India, eggplant is prominently featured in the cuisine of that country. It was introduced to Europe in the thirteenth century by Arab traders, and became a staple of Mediterranean cooking. Eggplant was introduced to the U.S. by Thomas Jefferson, who grew it at Monticello.

Eggplant is a versatile vegetable that can be grilled, baked, sautéed in olive oil, cooked in soups and stews, or breaded and fried. It has a firm meaty texture that makes it a favorite among vegetarians. Eggplant has a particular affinity for strong flavored vegetables and herbs like tomatoes, roasted pepper, garlic and basil, perhaps due to its sponge-like tendency to soak up the flavor of whatever it is cooked with.

September is an auspicious time to buy and eat eggplant. Since it is a vegetable that favors hot weather, the best eggplant will come to market after they have had some time to luxuriate in the heat of summer. When buying, favor firm, unblemished eggplant with smooth, shiny skin. Use them soon after buying, as they are exceedingly perishable.

When I was first starting to explore vegetarian cooking over 30 years ago, one of the first recipes I made was eggplant parmigiana from a wonderful cookbook called the Vegetarian Epicure which is now out of print. It is still one of my favorite ways to enjoy eggplant. Here’s the recipe:

Wash eggplant, and without peeling, slice it about ¾ inch thick. Dip these slices first in flour, then into the egg, then into the bread crumbs so they are well coated. Saute them in a little olive oil, a few at a time, until they are nicely browned on both sides; tend them carefully and add oil if it is needed.

When they are crisp and brown, arrange them on a baking dish and put a slice or two of Swiss cheese or Mozzarella on each one. Make a thick tomato sauce buy diluting the tomato paste with wine. Mix the tomato sauce with the oregano, salt, pepper, crushed garlic clove, and spread 2 to 3 tablespoons on each slice. Finally, sprinkle the grated Parmesan on top of it all. Bake at 400 degrees for about 15 minutes and serve steaming hot. Serves 4 to 6.

From The Vegetarian Epicure by Anna Thomas