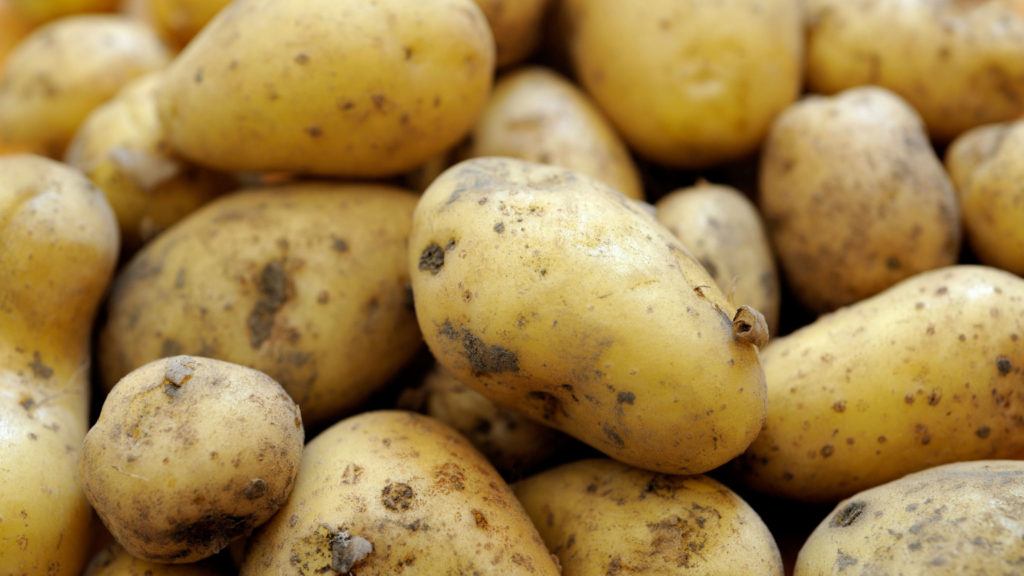 Considering the amount of them we eat, the potato has a curiously low profile. When I was growing up, we ate potatoes nearly every day with the evening meal. They were usually baked, sometimes boiled and invariably bland, although I do remember discovering at one point that baked potatoes are a lot better with a generous dollop of sour cream.

The lack of respect Americans give potatoes was noted by the famous food writer MFK Fisher. One day, in the sunny courtyard of a restaurant in France she encountered a potato soufflé: “It was hot, light, with a brown crust, and probably chives and grated Parmesan cheese were somewhere in it. But the great thing about it was that that it was served alone, in a course all by itself.”

To Fisher, this was a great thing because she had heretofore only experienced potatoes as the junior partner in the firm of “Meat-and-Potatoes.” A dish where potatoes were the star was a revelation, and a confirmation of her suspicion that “they could be good, if they were cooked respectfully.”

Unfortunately, potatoes continue to be disrespected. How else can you explain the fact that the majority of potatoes consumed in the U.S. are in the form of French fries and potato chips? This is a sordid state of affairs for a vegetable with such a long and illustrious history.

That history began over 7,000 years ago in the high Andes where hunter-gatherers domesticated the first potatoes. The potato became a staple food of successive Andean civilizations, included the Inca. When the Spanish conquered the Incans in 1532, they brought the potato to Europe, where it became popular throughout the continent, and especially in Northern Europe where it was a high yield crop that did well in cool climates. Today, the potato is the fourth leading food crop in the world and is grown on every continent except Antarctica.

Potatoes are a complex carbohydrate food that also contains some protein. They are a good source of vitamin C, B vitamins, and potassium. The minerals in potatoes are found in greater quantities under the skin, so they are more nutritious if they are not peeled.
When buying, choose firm potatoes free from soft spots or darkened areas. Avoid potatoes that are at all greenish, as this indicates the presence of a poisonous alkaloid called solanine.

Potatoes may be roasted, baked, boiled or fried, although if you are health conscious I don’t recommend frying anything. They are especially good in soups and stews, which they thicken nicely. At my house, our favorite potato dish is a potato curry. It is delicious served with basmati rice and rolled up in warm tortillas or chapattis with a little mango chutney. Here’s the recipe:

Wash the potatoes and dice as evenly as you can. Heat the ghee and when it is warm add the spices. Let them simmer for 2 or 3 minutes, then add the potatoes and immediately stir them around and turn them over until they all seem evenly coated with ghee and spices. Continue this process for about 5 to 10 minutes more, so that some of the potato cubes are a little crisped.

Add 2 cups water, lower the heat, and simmer slowly for about ½ hour, giving the occasional, gentle stir. The potatoes should be tender by this time. Now add the green peas and the yogurt, and heat it all through. Makes 4 to 6 servings.

Recipe from The Vegetarian Epicure by Anna Thomas